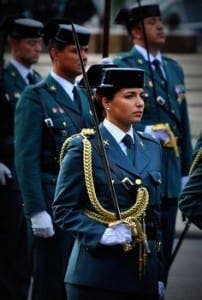 THE Guardia Civil has come under fire for failing to provide female staff with adequate bullet proof vests.

A complaint has been made by a  female member of staff who said that the jacket “doesn’t fit female bodies”.

The woman from the Salamanca province, was penalised for insubordination after buying her own bullet proof vest for €500.

The United Association of Civil Guards has launched a campaign to rectify the situation.

The womans secretary for AUGC  Pilar Villacorta, said “ The jackets that we have to wear are men’s jackets that are too big for us and which don’t fit female bodies. Not only do they not fit snugly – therefore reducing the protection offered – said Villacorta, they also make it hard for female officers to reach their guns, handcuffs and telescopic batons.”

The Guardia Civil responded saying over the next three years 21,000 bullet proof jackets will be purchased,with 2000 of them specially tailored for women.