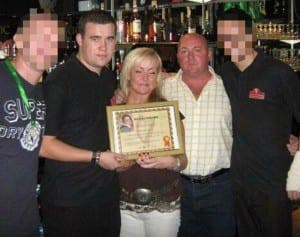 A photograph has emerged of the couple with Kinahan enforcer Aaron Bolger at the Auld Dubliner pub in Puerto Banus.

In the photo Audrey is presenting Bolger with a certificate thanking Kinahan for helping set up a fundraiser.

Enforcer Bolger was injured in a shooting at a MGM Marbella boxing weigh in in Dublin in a hit attempt on Daniel Kinahan.

Meanwhile, a documentary about Amy’s disappearance presented by Irish crime journalist Donal MacIntyre has been postponed after the TV company received a legal letter from Mahon’s lawyers.

NERO TO ZERO: Kinahan ‘financier’ and ‘enforcer’ arrested after seizure of 200 kilograms of cocaine and €500,000 cash last year