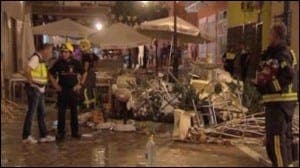 AN investigation has been launched into the gas explosion which injured 90 people in Velez-Malaga.

Local police and the town hall are trying to determine whether the incident was avoidable or if anyone is to blame.

Mayor Antonio Ferrer confirmed that the kitchen at the centre of the explosion hasn’t held a licence since 2013.

He added that a licence was last applied for in March 2013 to turn the premises into a burger bar but it had been denied.

The establishment – which is usually closed – had opened for the day to assist with the large number of people at the La Bohemia bar next door during the town’s feria.

Of the 90 people injured, four have been left with serious injuries including one man who needs an operation to save his eye.

Ferrer also applauded the Moroccan cook who evacuated the area after noticing a gas canister on fire.

He said: “If it wasn’t for the quick reactions of this woman the effect of the explosion could have been much worse.”