BUILDING a rural retreat to escape to at weekends opened up a new business opportunity for property professional Richard Woodland.

After moving to Spain almost 15 years ago, he initially worked for H2O Countrywide as an IT manager before setting up the Property Overseas Group, which concentrated on property sales along the coast.

“Having spent several years living in Marbella I was then attracted to the inland lifestyle and energy so I bought some land and constructed my own finca in Coin,” explains Richard.

“Initially this was intended as a weekend retreat, but it wasn’t long before I’d moved in permanently and then started my next building project in Monda”.

He soon gained experience of the country property market and, alongside his coastal operation, he now has a thriving inland office in Coin.

Richard works closely with local architects, lawyers, gardeners and builders, such as Coín Gardens, to provide a complete property service in the area.

Situated opposite La Trocha commercial centre in Coin, Property Overseas Group deals with sales and rentals in the town and its neighbouring villages of Monda, Guaro, Tolox & Alhaurin el Grande. 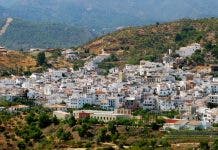