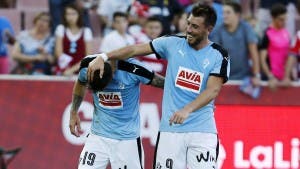 TWO La Liga footballers who filmed themselves having sex with a young woman are facing jail.

The unnamed woman has complained to Basque police after a video showing her having a steamy romp with Eibar stars Sergi Enrich and Antonio Luna went viral on social media.

Under Spanish law, the pair could be jailed for three months to a year for releasing the film without her consent.

The video was made a year ago, with Enrich and Luna saying this week they regretted ‘the potential damage [not only] to our image, but in particular to that of the club’.

They added: “The video shows a recording of a private act which took place between fully consenting adults.

“We are aware that professional footballers should set an example in every walk of life, especially to children and apologise if this incident has caused harm to anyone.”

Eibar dropped the players for a friendly this week, although they haven’t been suspended from La Liga action.