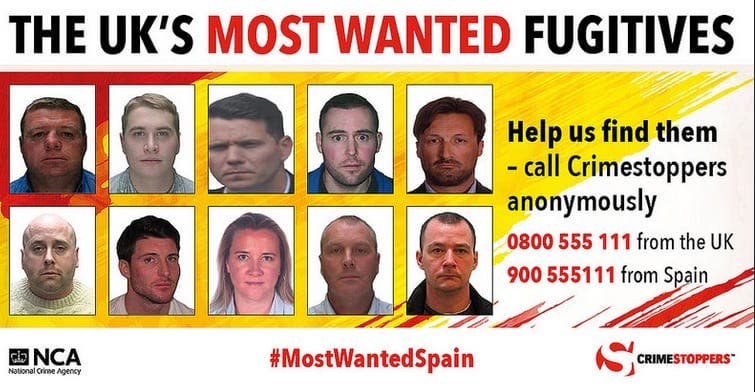 STEPHEN Lawrence murder suspect Jamie Acourt is on a hit list of Britain’s ten most wanted fugitives thought to be hiding in Spain.

Acourt is now wanted for drug dealing and is thought to be laying low in Spain’s British expat community.

The National Crime Agency and crime-fighting charity Crimestoppers have revealed the identities of suspects wanted for a range of crimes including murder, child sex exploitation and drug trafficking.

It comes on the tenth anniversary of Operation Captura, a collabaration between British and Spanish law enforcement agencies which saw 76 out of 86 suspects apprehended.

The British suspects being hunted by police are:

Shane O’Brien, 28, from London: Wanted by the Metropolitan Police on suspicion of murder. In October 2015 O’Brien was in a wine bar in Middlesex with several friends. It is alleged that O’Brien approached a man called Josh Hanson who was with his girlfriend at the bar, removed an item from his coat pocket and plunged it into the his neck.

Jonathon Kelly, 36, from Glasgow: Wanted by Police Scotland to serve remaining sentence of nine years 10 months for a number of serious assaults. Kelly, who is extremely violent, was convicted at various courts of a number of offences between 2002 and 2010. He is described as 180cm tall, heavy build, blue/grey eyes, short brown hair, Scottish accent, and occasionally has a beard. Also has scars to the left and right side of the face, on his arms and his right hand.

Stephen Carruthers, 43, from Bury: Wanted by Cumbria Police on suspicion of 18 offences of making indecent photographs of a child. Carruthers was arrested by police, who recovered a computer containing 5,332 indecent images of children. He is described as 172cm tall, medium build, short brown hair or shaved head and has blue eyes.

Sarah Panitzke, 42, from Fulford: Wanted by HMRC for conspiracy to acquire criminal property. Panitzke was a senior member of a crime group involved in a VAT fraud. Panitzke travelled extensively to further the fraud to places including Dubai, Spain and Andorra. She was responsible for laundering approximately £1billion.  She is described as 170cm tall, slim build with mousey straight hair, blue eyes and has a Yorkshire accent.

Mark Acklom, 43, from London: Wanted by Avon & Somerset Police on suspicion of fraud by false representation. Acklom allegedly make a number of false representations after starting a romantic relationship with a woman from Bath in January 2012. After saying he had cash flow problems that were hindering renovation work at one of the properties he wanted them to live in, the woman gave him numerous loans totalling £850,000. It later transpired that Acklom did not own the property. He disappeared and she never received any of her money back. He is described as 5ft 10ins tall, medium build, dark brown hair and green eyes.

Matthew Sammon, 45, from London: Wanted by the Metropolitan Police on suspicion of making and possessing indecent photographs of children. On 24 April 2014 a search warrant was executed at his home in Croydon as officers believed that indecent images of children had been downloaded on a computer registered at the address. He is described as 5ft 9ins tall, short brown hair, medium build, and speaks with a soft London accent.

Dominic McInally, aged 25, from Liverpool: Wanted by Merseyside Police on suspicion of conspiracy to supply cocaine. McInally is the alleged leader of a drug trafficking gang that expected to bank £1.25m every month. He is described as 178cm tall and has blond hair.

Mark Quinn, aged 52, from Liverpool: Wanted by Police Scotland on suspicion of supplying amphetamine. Between August 2013 and April 2014 Quinn was allegedly involved in an organised crime group concerned in the production, transportation and distribution of amphetamine with a street value of over £11m. He is described as 5ft 9ins tall, large build and has short brown hair.

Simon McGuffie, aged 41, from Liverpool: Wanted by The North West Regional Organised Crime Unit (Titan) on suspicion of being a member of a Merseyside organised crime group involved in the large-scale supply of Cocaine, Heroin and Cannabis across the North West. He has a scarred right arm and distinctive 2” scar to the right cheek.

Lord Ashcroft, the Founder and Chair of Crimestoppers, said: “As we mark the tenth anniversary of Operation Captura, it is safe to say it has been an extremely effective way of tracking down some of the most wanted individuals who are deliberately running from justice.

“These people have managed to evade arrest and avoid justice. We know that with the help of Spanish authorities, along with the public in Spain and the UK, we can find these people.”