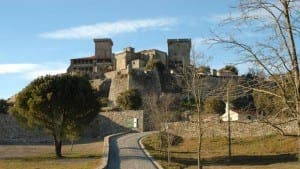 A PARADOR inside a 12th century Spanish castle has been declared illegal.

The High Court has annulled permission to use the El Castillo de Monterrei as a luxury hotel.

It comes after an 18 month legal wrangling following protests against the original building permit granted in May 2014.

Those opposed to the plans, claimed that the original permission gave to developers would ‘destroy an important part of history’.

The ruling found that the original permission granted by the Monterrei Town Hall had exceeded building regulations and planning laws.

The medieval castle belonged to the House of Alba is one of the best preserved in Galicia.

The town hall wanted to transform the castle to boost dwindling tourism figures in the area.

“The plan behind the castle-parador was to increase cultural tourism in the regin and attract more business to the area,” a town hall spokesman said.

The Galician tourist board – who support the parador – is now considering filing an appeal against the ruling.