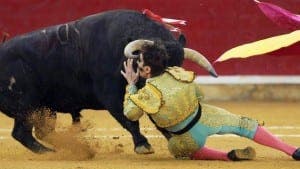 SPAIN’S famous one-eyed matador has been gored in the face… again!

Five years after losing his left eye in a horrific goring, Juan Jose Padilla has taken another horn to the face in almost identical circumstances.

Incredibly he took the blow in virtually the same spot in the same bullring in Zaragoza.

Going down on his knees, the ‘Pirate’ – as he is nicknamed, because of his eye patch – attempted to dive out of the way as the bull charged towards him.

In an ironic twist of fate, the damage is not too serious… because his eye has already been removed.