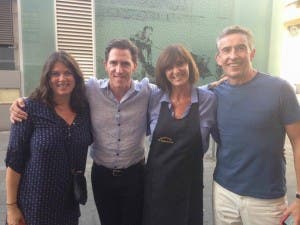 IT’S not every day comedy royalty walk through your restaurant doors.

But when Steve Coogan and Rob Brydon turned up at Malaga’s Refectorium, owner Curry Ramirez knew it wasn’t going to be an average day.

The pair had travelled to the heart of Malaga’s old town to film the final scenes for the third series of their TV hit comedy, The Trip.

After their gastronomic gallivanting around northern England and Italy for previous shows, which feature Coogan as a travelling food critic for The Observer newspaper and Brydon as his long-suffering sidekick, director Michael Winterbottom had personally chosen Refectorium for their Spanish excursion.

“Michael Winterbottom came in around four months ago and had a meal with us,” says Curry.

“He was lovely, and really enjoyed the food. I’ll admit, I’d not heard of The Trip before, but he gave me a copy of the last two series which I watched.”

Refectorium has specialised in classic Malaga fare for decades. But even for Curry’s father, who opened the restaurant 30 years ago, hosting a 20-strong film crew for the day was a first.

“It was a completely new experience for us,” said Curry. “They came around 11.30am and stayed until 6pm. I closed off the restaurant and my friends ate at seven tables as extras.

“I was serving Steve and Rob. We made them Russian salad, serrano ham, grilled prawns, anchovies, artichokes, calamari and swordfish for main.”

And of course, the pair swapped jokes over a bottle of the finest local plonk.

“We served them a white Malaga Botani, which they loved,” said Curry.