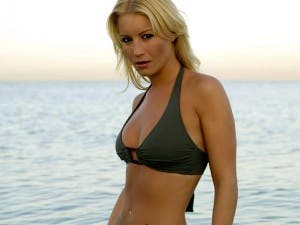 DENISE VAN OUTEN has teamed up with a Spanish golf resort in a bid to improve her handicap.

The British TV star has been staying at the Las Colinas resort on the Costa Blanca where she is attempting to complete a round in less than 100 shots.

“I got into golf when I turned 40 and was looking for something to do as a hobby,” said Denise, “I was at Stoke Park hosting the 100-hole golf challenge charity event and some friends who were playing got me to have a go. It was the first time I’d ever played and literally I was on the green in a pair of Jimmy Choo heels.”

But the 42-year-old says she has well and truly got the golf bug and is determined to improve her game.

She has been back and forth between Kent and the Costa Blanca since May and will return to tee-up again in December.

Since opening in 2010, the 18-hole championship course, which includes an academy, has hosted qualifying stages of the European Tour and been ranked as one of the top 100 courses in Europe.