THE owner of a junkyard in Spain has replaced his guard dogs with a pair of toro bravos after he was victim to seven break-ins this summer.

Emilio Cervero said his troubles began earlier this year, when local authorities in the Valencian town of Montserrat built a new roundabout adjacent to his land.

He was expropriated of part of his property, and the provincial government sealed off his downsized land with a wire fence to replace the original concrete wall which featured barbed wire protection.

He said there have been seven break-ins since, with looters snipping a hole in the wall, luring the guard dogs out of the compound, and simply walking in to take what they needed.

The fence had to be fixed repeatedly, while the constant setting off of alarms began taking its toll on neighbours.

He decided to take more drastic action when the it became clear the guard dogs weren’t guarding much at all.

Cervero was only allowed to build a new concrete wall 25 metres in from the original spot, and as his property had already been downsized, Cervero couldn’t afford to lose any more space.

Feeling out of options, he decided to replace his guard dogs with two fighting bulls.

He said: “The bulls can roam around freely in the yard and let’s hope they do their job,

“All I am trying to do is protect my property.” 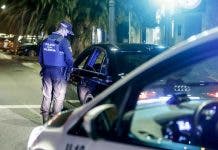