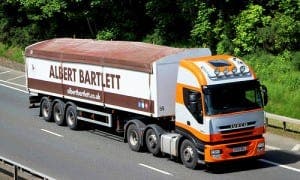 A BABY and two children are among 15 suspected migrants who have been found in the back of a lorry in Norfolk in the UK.

The group, who are believed to have travelled from Spain, were found in the vehicle when it arrived at the Albert Bartlett factory on Monday.

They reportedly pushed sweet potatoes out of a hole to alert workers that they were inside.

Police and medical services were called to the scene before the group were moved into the care of the Home Office.

A spokesman for the factory said staff did not know the origin of the group or whether the lorry driver had known he was transporting them.
The Home Office immigration enforcement agency has taken over the investigation.