SPAIN’S new conservative government is preparing a measure that could ban sharing memes on the internet.

The Partido Popular’s proposal, which was presented as a motion to congress this week, calls for a curb on ‘spreading images that infringe on the honour of a person’.

It has seen at least two Spaniards arrested for tweeting or taking pictures of policemen.

The new proposal has been blasted as another threat to freedom of expression. 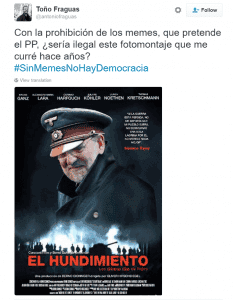 “If the intent is to pursue those who publish images without consent, then an act as widespread as sharing political criticism in the form of memes becomes a risky activity,” warned Carlos Sánchez Almeida from the Platform in Defence of Freedom of Information (PDLI).
The measure has been met with a barrage of memes flooding the internet and mocking Rajoy.

The prime minister will likely find it difficult to pass the law given that he leads a minority government and only holds 137 of the 350 parliamentary seats.

Walter Finch - 9 Dec, 2022 @ 14:15
Spain’s crumbling defeat to Morocco in the World Cup on Tuesday prompted the country’s extremist elements to crawl out and ‘defend Spain’ ahead of...