In an excerpt from their new book, Cruise Yourself Slim, Fuengir 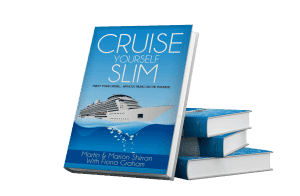 THE extensive choice of delicious food is one of the main attractions on board a cruise ship. But sometimes cruisers slip into what we call ‘Last Supper Syndrome’ when faced with so much choice in so many different restaurants. While they can faithfully follow a sensible eating pattern, at home, they ‘crash and burn’ as soon as they walk on board the ship and in through the restaurant door.

Don’t be fooled into thinking that a little bit of each of the various salad choices from the buffet option will be better than having a set meal in the main dining-room. A small amount of a few bits and pieces will often add up to substantially more food than the one course served on a plate for you by the chef! 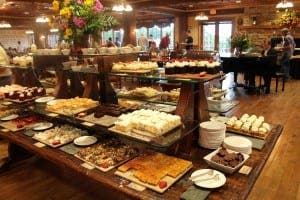 Did you know that that the further away a person sits from a buffet, the less likely they are to overeat?

Make going up for second helpings more of a hassle by putting as much distance between you and the food as possible. It’s also helpful to sit with your back to the food, once you’ve made your choice, so you’re not being tempt
ed by all the other delicious dishes on offer while you’re actually eating.

Did you know that asking your partner to visit the buffet for you and choose a small selection of food is almost guaranteed to reduce your total calorie consumption?

Do ensure, however, that they only visit the buffet once on your behalf. Our observational research indicated that most overweight people visit the buffet three times per sitting, so ‘out of sight out of mind’ really may help! 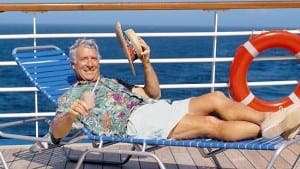 Did you know that you burn way less calories lounging around on a boat for eight hours a day?

If you also incorporate an afternoon nap on a sun lounger, you could use up as little as 600 calories a day. And as if that’s not bad enough, it only takes around eight minutes or so to drink those 600 calories back on with a Piña Colada – shocking but true!

Did you know that alcohol is referred to as the ‘devil’ when it comes to weight control? And not only because it enhances hunger, tempting you to eat more. Alcohol is regarded as a toxin by the body, resulting in it being processed quickly and ahead of anything else in your stomach. If you drank half a bottle of wine with your steak and all the trimmings, the body would metabolise the wine first, leaving the steak and fries in your stomach to turn to fat. More about alcohol later!

Average cruiser’s day on board

The day begins with a food choice actually faced about eight hours earlier. Just before turning in on their first night, Adam and Annie think how great it would be to have a pot of fresh-brewed coffee arrive at their door first thing in the morning.

They then realise they can order just that, courtesy of room service. But when ploughing through the order card they realise it’s not just tea or coffee on offer. There are Croissants. Poached eggs. Fruit. Cake. Orange juice. A veritable breakfast menu before they even need to get dressed! They manage to resist a full blow-out but can’t help themselves: a pot of coffee and two all-butter croissants it is!

Don’t forget, this is BEFORE breakfast! Those two croissants? On average they’d clock in at around 250 calories each. Time taken to work that off? Run. At 5mph. For half an hour. Yes RUN for half an hour to shed that one croissant.

The couple get themselves up and dressed, no rush, and decide they really ought to see what breakfast is on offer, whether in the buffet or the dining room. Well, it’s paid for, isn’t it…? And it proves too much of a challenge, that choice to recognise hunger as opposed to fullness, want as opposed to need, the choice to figure what motivation might mean when it comes to food profit and loss accounting. So orange juice (copious quantities – free, obviously you make the most) eggs, ham/bacon, mushrooms & tomatoes (seem healthier than hash browns), toast and butter, plus a repeat visit for a pastry – just one, naturally… Not a lot, not really… Orange juice, one fried egg, one serving of bacon or ham, some mushrooms and tomatoes, toast and butter, one pastry…. £$€? Conservatively, 1091 calories. Read that again. 1091 calories. (Yes, you are entitled to eat approx. 2,000 or so in a day; but this couple has reached 1300-plus by the end of breakfast!)