IT has been 13 years in waiting. 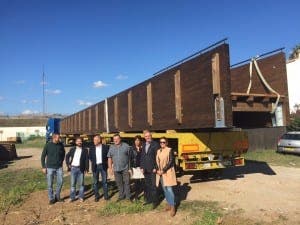 But  after three changes in government and at least a dozen mayors, the coastal walkway bridge linking Manilva (Sabinillas) and Casares is finally about to be put in place.

Costing €80,000, the 33 metre long wooden structure has spent the last few days travelling in a huge lorry from Vitoria-Gasteiz in the Basque Country, where it was made.

Three lorries and a huge crane were needed to lift the two metre wide stucture from its transit over a row of houses in Casares Marina to a temporary car park, where it is currently sitting.

It will be installed by the end of the week over the mouth of the Rio Manilva to connect the two communities.

“It’s very exciting to finally see it happening after so many years of waiting and so many false hopes.”

His counterpart in Manilva, Mario Jimenez, told The Olive Press: “It’s great to be finally linking these two key towns and we expect thousands to use it every day.”

The bridge has been financed by Casares and Manilva town halls and the Andalucian Junta.

Until now, people have had to walk acros

s the beach and get their feet wet during the winter months. Or they have had to cross over the busy motorway bridge.

It is the latest stage in the ambitious La Senda Litoral project, which aims to create a giant walkway stretching  160km from Manilva to Nerja.