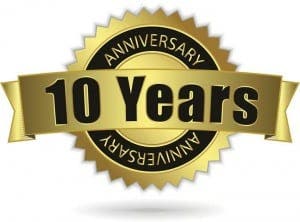 WELL somehow we made it!

After years of recession, dozens of threats and a series of lawsuits (all of them won) I am proud to be producing the tenth anniversary issue of the Olive Press.

The approach of Brexit is nothing in comparison to the labyrinthine Kafka-esquestyle environment of running a business in Andalucia.

Add to that rivals who promised the earth, yet failed to pay their printing bills, rent and staff, and yup, we’ve had one hell of a decade.

When I launched the paper in Ronda in November 2006, I did so out of desperation for a genuine newspaper to support the huge expat population in Andalucia.

After more than a decade working in Fleet Street, travelling the world investigating injustice, scandal and corruption, I couldn’t believe what I found on my very own doorstep.

There were no real expat journalists investigating the issues that mattered to foreigners … and no newspapers giving them a voice.

The millions of expats here were being insulted with nothing more than cheap magazines and papers which (badly) translated local articles.

Whether to help expats fight injustice against fraudsters, corrupt town halls, or to highlight the numerous barbaric projects that threatened the environment, I wanted to offer a proper campaigning newspaper.

Initially the establishment tried to discredit the paper and told us to shut up. We were threatened with legal action and described by one jealous rival (guess who?), as a ‘biased, sensationalist rag full of propaganda’ and told to go home.

Well we didn’t return – or shut up – and our stories began to get followed up in the UK and soon national Spanish press.

Our small regional paper soon started to expand and, within a few years, could be found in every town inland and on the coast, where we have many thousands of loyal readers and advertisers.

Growth continued with new websites, new magazines and even a new edition last year in Gibraltar.

The march continues and we were voted this year as Spain’s best English language paper, second in the world, in the TESCA awards, voted by you!

We continue to employ the best young English journalists in Spain and serve up the best quality features, food articles, while doing everything by the books and not cutting corners.

Business is never easy in Andalucia and we continually have to put up with sniping – and even insidious lies from bitter rivals about our products – but we soldier on.

All of this, of course, would not have been possible without you, the readers, not to mention our fabulous advertisers be they local or international. Thanks for your support.

We look forward to growing in strength over the next decade, with you alongside us.

We are your voice. For that, after all, is the point.