SPREAD-EAGLED on the snow, the beginnings of a (still-painful) black eye pulsing beneath my sunglasses and skis nowhere to be seen, I knew what Walt Disney’s stilt-legged fawn felt like when he first stepped onto ice.

Safe to say, my maiden downhill run on the Costa del Sol’s ski slopes was more Eddie the Eagle Edwards than Ski Sunday.

With my five friends chuckling to themselves 10 metres downhill, I unleashed an onslaught of expletives as colourful as Joseph’s dreamcoat as I tumbled to the floor for the sixth time in 20 seconds, no kidding.

(A PG translation would read something like: ‘sod this, it’s a stupid sport, I’m walking down’.)

As my fellow skiers wiped tears of laughter from their eyes, one true pal volunteered to take on the challenge of teaching this stubborn, unstable, six-foot city boy the rudiments of alpine skiing.

(It was in fact former Olive Press hack Iona Napier who took pity on me and assumed the role of my knight in shining skiwear.)

With a core balance only rivalled by Bambi for ineffectiveness, I got myself back on two skis.

This in itself was somewhat of an achievement, as I found it virtually impossible to put the damn things on.

Thankfully Iona was there to point out that I had to wipe off the mounds of snow stuck to the bottom of my boots before placing them into the skis (who would’ve thought?!).

The light snow and heavy fog which greeted me in the morning at the holding area had cleared by the time I had battled my way onto the ski lift and reached the summit of the ‘green’ (as in proby) slope.

Allegedly the ‘easiest and least steep’ of the lot, the journey south looked practically vertical from where I was stood.

But after my initial paddy I was back on my skis and, with knees knocking and toes pointing inward in a awkward-looking snow plough, I had lift off.

Kids who looked too young to walk, let alone ski, whizzed past me as I cut diagonally across the slope in my first slalom turn. But I couldn’t have cared less. I was skiing, at last.

Iona was keeping a close watch, shouting inaudible words of encouragement as I picked up speed.

‘Turn right, turn right!’ she bellowed as I headed towards the edge of the slope.

‘Lean on the outside leg and tilt slightly down the hill,’ I had been instructed earlier on.

Now, there’s no two ways about it, leaning on your outside leg and tilting downhill does not make any sense at all but I tried it. However I failed to turn far enough and, to my immediate horror, found myself catapulting straight downhill. 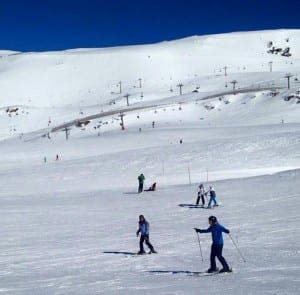 With my speed picking up to a pace that (to me) felt worthy of World Alpine Ski Champion Marcel Hirscher, Iona’s voice a distant cry behind me, I stopped my breakneck descent to certain injury, if not death, the only way I knew how, hurling my body into the snow like a ship weighing anchor.

One ski had parted company from my boot a good 10 metres behind me while the other was wedged beneath my twisted body.

Runs two and three finished in similar style. But then, lo and behold, it started getting easier. By day two, my body aching and my mind weary, I made it down the slope without a fall.

Learning to ski in adulthood is as unnatural a process as I’ve ever experienced. But the white stuff on our doorstep has to be tried and, once you’ve got the hang of it, there’s no better feeling!

On top of the world: Granada’s Sierra Nevada is the perfect active tourism destination in Spain