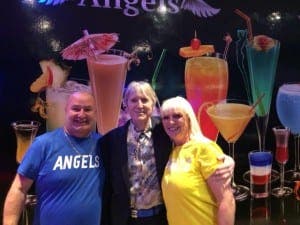 The singer and impersonator made a star appearance at Angels in Benalmadena, which is under new ownership.

During his career, Longthorne has performed at the Royal Albert Hall, Sydney Opera House and London Palladium and sold out Las Vegas hotels.

And the star added his own touch of glamour to Angels, which has just been refurbished in time for 2017.