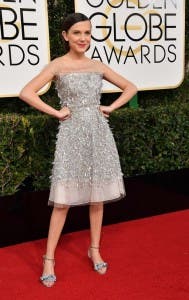 The Marbella-born actress glowed in a silver Jenny Packham midi-dress as she posed for photos and spoke to press.

The 12-year-old British star was nominated alongside her cast for Best Drama Series for Stranger Things, the break-out Netflix show of the summer.

“It’s incredible, I’m so grateful,” Millie said, “Being here with everyone, I really couldn’t have done it without Netflix.”

She went on to thank her family too, but when asked where her fellow co-stars were, she admitted that she was late to arrive.
“I came late. I’ll probably meet up with them later,” she said, before admitting that she wanted to try and find her favourite actress Natalie Portman at the awards show.

Stranger Things sees a group of boys in 1980s Indiana attempt to save their friend from a dark underworld with the help of a girl, ‘Eleven’- played by Brown – who has special kinetic abilities.

It lost the award to The Crown, a drama chronicling the life of Queen Elizabeth II from the 1940s to modern times.

Alex Trelinski - 24 May, 2022 @ 18:00
SPAIN'S cabinet has approved plans to spend €12.25 billion over five years in developing the country's micro chip and semi-conductor sector. The investment has gone...