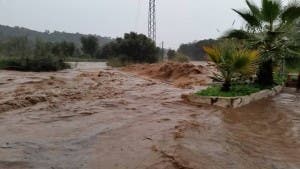 EMERGENCY river repairs are to be carried out in flood-wrecked parts of Andalucia.

The Junta has promised €6.6 million to fix waterways and try stop future floods in Malaga, Cadiz and Huelva .

It is believed that blocked rivers in part contributed to the severity of December’s deluges, which left two people dead and caused millions of euros of damage.

The money will be used to repair damaged riverbanks and remove large objects dislodged by the floods that are now blocking water flows.

It will also fund repairs to hydraulic structures such as reservoirs.

The Junta has budgeted a further €5 million for river cleaning during 2017 to keep waterways clear.