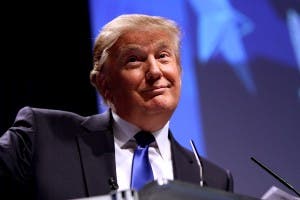 DONALD Trump’s White House has been widely condemned for taking down the Spanish version of its website.

Just hours after Trump’s inauguration on Friday, the Spanish version of the White House website was taken down, along with information about climate change and LGBT rights.

Numerous celebrities and Spanish societies have spoken out about the move, labelling it as exclusionary.

The director of the Real Academia Española, well-respected guardian of the Spanish language, said that the move was “related to the expulsion of minorities.”

The director of the Instituto Cervantes added that the gesture was “symbolic but serious”.

The Spanish foreign minister Alfonso Dastis told reporters that it “doesn’t seem like a good idea”.

According to the US Census Bureau, there are almost 57 million Spanish speakers among the 320-million-strong US population.

The Obama administration had a regularly-updated Spanish version of the website, and even a Spanish-language Twitter account. George W. Bush’s administration also maintained a translation of the site in Spanish.

The White House has not responded to enquiries as to whether or not the move is permanent.

In 2015 Trump said during a debate that “to have a country, we have to have assimilation… This is a country where we speak English, not Spanish.”