AN OMBUDSMAN has launched an investigation into the worrying risks to Donana National Park.

Andaluz official Jesús Maeztu wants to give people ‘transparent information’ on the current situation of the beleaguered Sevilla/Huelva zone, which risks being added to UNESCO’s list of endangered world heritage sites.

He hit out at controversial economic projects either proposed or already carried out there,  such as the dredging of its wetlands, widening of nearby roads and Gas Natural Fenosa’s plan to store gas underneath it.

and is home to some 4,000 plant and animal species.

“The worldwide recognition of its uniqueness has not prevented projects from being carried out year after year despite the cause for alarm they raise.

“Some examples are the gas projects, the  road connection between Huelva and Cadiz , the failed Balboa pipeline and refinery project, the dredging of the river Guadalquivir and the overexploitation of the aquifer with hundreds of illegal wells.

“Economic development that is not compatible with respect for 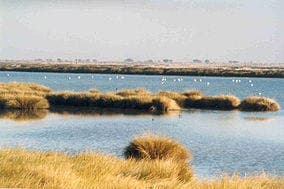 environmental values is not sustainable.”