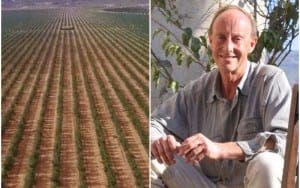 A BRITISH expat has successfully enlisted the help of the UN to probe a farming scandal that is ‘killing the last oasis’ in Europe.

Thanks to green campaigner David Dene, the UN Office of Human Rights is investigating the alleged destruction of the ‘El Rio de Aguas’ area of Almeria due to intensive olive tree production.

Environmentalists claim the trees are rapidly depleting a precious underground aquifer, which is rapidly running dry.

They insist the lack of water is already wreaking havoc on the environment and forcing whole communities to move.

“It’s a massive human and environmental rights abuse, which is why the UN is now looking into it”, explained Dene, is based in the same village as eco charity Sunseed.

“Four million trees have been planted by large industrial producers over the last few years.

“Each is extracting 10 litres of water a day from the aquifer, which is a basin of non-renewable water that both humans and nature depends upon to survive in this area.

“Already a few communities have been forced to move and we now have to drive 15km to the nearest spring to get our water.”

Dene continued: “At the current rate, unless something is done, the aquifer will run dry in just a few years”, he said. “It’s killing the last oasis in Europe.”