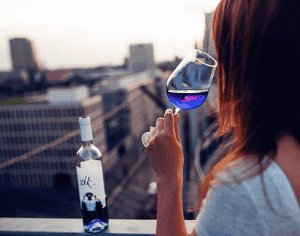 SPAIN has banned a brand of blue tipple from calling itself ‘wine’.

Traded as Gik, the blend of red and white wine comes from grapes produced in the La Rioja, Leon and Castilla-La Mancha regions. But authorities say it is the ‘wrong colour’, and therefore cannot be advertised as wine.

The ban comes after the company was visited by two inspectors last August before being taken to court, where it was ruled that blue wine does not fit among the 17 approved types.

A 750ml bottle of the sweet grape drink sells for around €8 and was dreamt up by a team of six entrepreneurs in their 20s.

It has sold more than 100,000 bottles since its launch last year.

“In order to continue selling, we have been forced to stop labelling Gik as a wine. Instead, we had to label it as a bastard category named ‘Other alcoholic drinks’,” the company said in an online petition against the ruling.

“The main reason? There’s not a category for a blue wine, as there is no historic background for anything similar,”

The company added: “This is unfair for all you who trust us, because you have the right to enjoy the original product; and it is absurd too, as its composition is 100% wine.”

“We had to change the composition to 99 per cent wine and 1 per cent grape to adapt the product to the current legislation.”