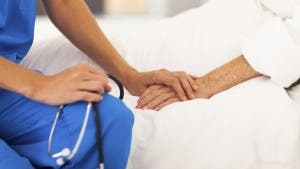 A EUTHANASIA bill is to be debated by Spanish politicians.

Left wing parliamentary group Unidos Podemos en Comu wants to legalise the practice in all of Spain and decriminalise doctors who carry it out.

If successful, it would allow both adults with terminal illnesses and those in ‘insufferable pain’ to request help to end their lives.

In a document presented to Congress, the lower house of parliament, people would also have to be sound of mind, conscious and wanting to do so voluntarily.

This is in addition to having to file two written requests, each at least 15 days apart.

Group spokeswoman María Sibina argued that currently ‘Spain is not a good place to die’ due to a lack of quality palliative care.

No date has yet been set for the debate on the law, which has already been rejected by the right wing Partido Popular and Ciudadanos, who want to introduce fresh measures to ensure a ‘dignified death’ instead.

Socialist party PSOE said that it will study the text presented.

Euthanasia is already allowed in countries such as Switzerland, Belgium, the Netherlands, Luxemburg, Canada and some states in the USA.