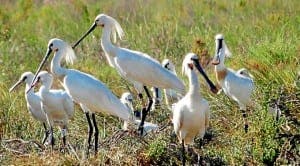 BIRDS are wintering in Andalucia in record numbers this year.

Almost one million migrating breeds have been recorded in the region’s wetlands, 115,000 more than in 2004, the last peak year.

Andalucia’s environment councillor, José Fiscal, has said that higher than normal rainfall is to thank for the increase, which has heightened water levels in places such as Donana National Park, where 70% of the birds were recorded.

Fiscal said the Junta would continue to develop its protection of the region’s wetlands, which are important sites for biodiversity.

Heatwave: How unseasonably high temperatures are taking a toll on Spain’s nesting birds