PABLO Iglesias has been re-elected as Podemos leader in a landslide victory.

The firebrand leader cemented his control of the left-wing party by winning both the votes in the general secretary and political agenda races, both of which he said he needed to win to remain in the top job.

He also triumphed against his biggest threat, the more moderate Iñigo Errejón, whose policy package gained only 33% of the votes against Iglesias’s 56%.

It is not yet known if Errejón, who was openly critical of Podemos to run on a joint general election ticket with United Left (which includes the Partido Comunista de Espana) will continue in his role as the party’s political secretary and spokesperson.

His list of party loyalists also triumphed in the elections to the party’s citizens’ council, the main decision-making body, by gaining 60% of the total seats.

Spanish coalition government to extend ban on home evictions by up to four years, affecting renters and homeowners alike 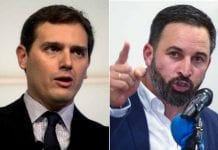