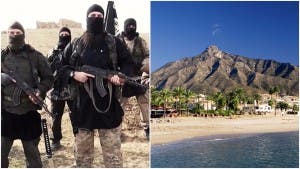 A GOVERNMENT report has warned of ‘direct threats’ to Spain issued by the sick death cult ISIS.

The Jihadi group has vowed to take revenge on the country after it cracked down on militants and made dozens of arrests last year, with more than 215 being cuffed since 2015.

According to The Daily Star, the report reveals that the terror group, which operates out of Syria and Iraq, has ramped up its campaign to hire Spanish translators, suggesting plans to attract Spanish-speaking foreign fighters.

It comes after terror experts said Spain is at significant risk of a Berlin-style truck attack this summer due to the surge in European and British tourists.

David Videcette, a former Met Police counter-terrorism officer who investigated the 7/7 London bombings, told The Daily Star: “It’s very possible there could be an attack in Spain.

“When you think about it Spain is one of the few countries in Europe that hasn’t had a major attack in recent years.

“These things are always bubbling away and we’re relying on the security services and the police to gather intelligence and get hold of these people.”

Mr Videcette said Spanish resorts are particularly vulnerable to a truck attacks due to their wide-open seafront promenades which have daily lorry deliveries coming and going unnoticed.

“They may well be looking to attack specific countries with tourists,” he added.

CURFEWS AND CLOSURES: How the end of Spain’s State of Alarm will change COVID-19 rules

Cristina Hodgson - 12 Apr, 2021 @ 13:30
THE Junta is calling for voluntary vaccination with AstraZeneca for the under-60s. Following Spain’s vaccine strategy U-turn on AstraZeneca use last week, the Regional Health...