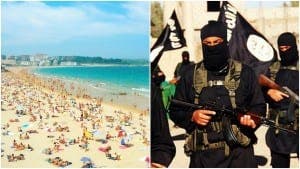 A SECURITY expert has urged Brits not to be put off going to Spain for fear of terror attacks.

This comes after a Spanish government report warned of an increased threat from ISIS.

Security expert Will Geddes appeared on ITV’s This Morning and TalkRadio to talk about the report.

“We can’t allow the terrorists to win,” he said.

Geddes pointed out that the terror threat is alarmingly high all over Europe, including in the UK.

“Walking into central London, or Manchester or Birmingham, or any other major city in the UK, presents its own risks” he said.

Geddes is a ‘security specialist’ and CEO of ICP Group and TacticsON.

The UK and Spain are both at level four out of five of anti-terror alert.

Spanish police have recently cracked down on terrorist groups, with dozens of arrests being made.