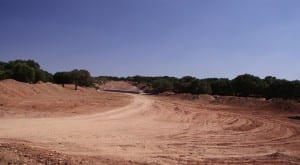 A CONTROVERSIAL uranium mine has been denounced to the EU.

Global conservation group WWF has told the European Commission the open cast mine in Salamanca, which would be the largest in Europe, poses risks to nature and people.

It believes that the Spanish government and Castile y Leon Junta were wrong to last year give the go-ahead to Australian mining company to Berkeley Energia to begin constructing the mine before ‘assessing the risks.’

The company wants to extract the element for use in nuclear power stations.

A WWF spokesperson claimed that the mine could lead to the extinction of certain animals and wreck habitats, as well as causing potential health problems and destroying the local economy.

A state-owned mine operated in the area from the early 1970s until the early 2000s but was mucher smaller in scale.

Berkeley Energia has not replied to the Olive Press’s request for a comment.