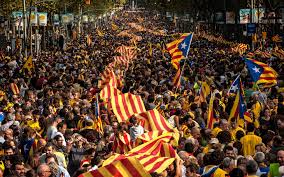 PRO-INDEPENDENCE Spanish lawmakers in Catalonia have approved a 2017 budget to fund a referendum to secede from Spain.

The budget guarantees funds for a vote on secession despite warnings that it would be unconstitutional.

Catalonia has aimed to become independent from Spain for years, despite it being against the country’s constitution.

The Catalan government has pledged to hold a referendum by the end of September.

Unemployment increases in August in Spain, but it is the best data for this month since 2008