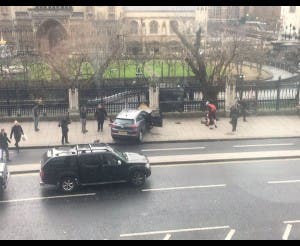 A MACHETE-wielding man has been shot after he stabbed a policeman on Parliament grounds in London.

A car was also driven through a group of people on Westminster bridge.

Commons Leader David Lidington told MPs: “There are also reports of further violent incidents in the vicinity of the Palace of Westminster but I hope colleagues on all sides will appreciate that it’d be wrong of me to go into further details until we have confirmation from the police and from the House security authorities about what is going on.”

Parliament and the surrounding area has been placed on lockdown with MPs locked inside.

A ‘police officer has been stabbed’ and the ‘alleged assailant was shot by armed police’, Commons Leader David Lidington has told MPs.

“It’s a lot of panic in here right now,” a witness who works inside the building has told the Olive Press.

“We are not really sure what is going on, we are in lockdown.

“We didn’t see anything but there were lots of bangs and screams.”

Met police said on Twitter: “We were called at approx 2:40 pm to reports of an incident at Westminster Bridge. Being treated as a firearms incident – police on scene.”

Reports say at least 12 people have been left injured.

There at least 10 ambulances on the scene, as well as an air ambulance.

Prime Minister Theresa May has been declared safe.