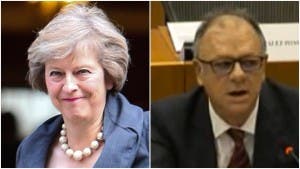 Speaking to the EU parliament, the legal experts said Brexit could see a surge in European citizens using human rights laws to remain in the UK.

The professors said the rights to family life and property, enshrined in the European Convention on Human Rights, could give millions a legal case to stay in Britain, even after it has left the EU.

It means that Europeans who arrive in the UK after any ‘cut-off’ date would still be able to remain if they can show they have set down roots in the country.

London and Brussels are expected to agree  transitional measures on citizens’ rights which could last for several years beyond 2019, by which time many new arrivals may have bought properties and had families, granting them rights to stay under ECHR law.

The revelation was presented by Antonio Fernández Tomás and and Diego López Garrido, both experts in EU law from the University of Castilla-La Mancha.

The pair had been asked by MEPs to prepare a report on Brexit’s impact on residency rights.

Their conclusion was that the huge loss of rights that will follow, from family connections to pension contributions, would cause a ‘nightmarish’ web of legal complications that will take years to resolve.

Professor Garrido said : “The ECHR can be used by those people who feel threatened by the UK leaving the EU. We still believe it could be used in defence of family rights and property rights.

“Obviously, those people may take their cases to court, hence the importance for there to be an agreement between the UK and the EU it has to be a good agreement and as close as possible to the current situation.