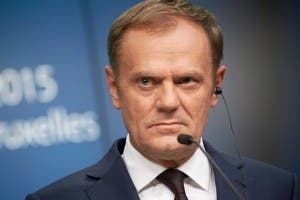 DONALD Tusk has ruled out parallel talks between the UK and member states until it makes ‘progress’ on its Brexit bill – including the settling of its bills and guaranteeing citizens’s rights.

The European Council president said: “Once, and only once we have achieved sufficient progress on the withdrawal, can we discuss the framework for our future relationship. Starting parallel talks will not happen.”

Tusk said the EU was united behind this principle and wanted to see progress on settling the status of EU nationals and Britain’s share of EU liabilities.

“It is only fair towards all those people, communities, scientists, farmers and so on to whom we, all the 28, promised and owe this money.”

“The talks will be difficult, complex and sometimes confrontational,” Tusk added.

“But the EU will not pursue a punitive approach … Brexit itself is already punitive enough.”

He added in a draft that the UK must accept EU rules, including budget contributions and the authority of the European Court of Justice in its transition period.

“The European council will monitor progress closely and determine when sufficient progress has been achieved to allow negotiations to proceed to the next phase,” the draft says.

If the UK wants to maintain single market access post-Brexit, it will have to adhere to all four freedoms – including free movement.

“There can be no cherrypicking,” the draft reads, “nor any separate negotiations between individual states and the UK.”