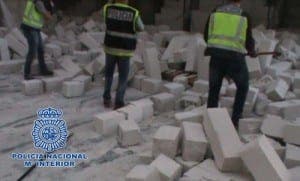 SPANISH police revealed on Wednesday a discovery of half a tonne of cocaine.

It came after a two-year investigation including 28 nationwide raids and resulted in the arrests of 25 people.

Police found the cocaine hidden in fake fireplace bricks by breaking open thousands in a warehouse.

It’s alleged an individual living in Colombia, Mexico and Spain is the leader of the drug ring responsible.