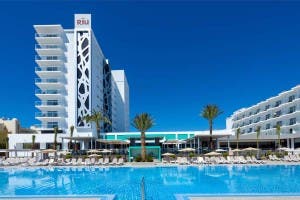 A MAJOR global hotel chain has opened a new mega-site on the Costa del Sol.

The 4-star hotel, which was formed by unifying the former Riu Belplaya and Riu Costa Lago hotels, opened its doors at the beginning of April.

There are four outdoor swimming pools and one heated indoor pool, as well as a ‘splash’ park for kids. The beachfront main pool, covering over 400 square metres, is surrounded by a solarium.

The ClubHotel Ruil also boasts a gym, Turkish bath and spa, as well as WiFi throughout.

Dead body found in a gym in Spain’s Andalucia

Could this be Spain’s most romantic place to stay? Jon Clarke takes a trip to DDG Retreat on the Costa del Sol