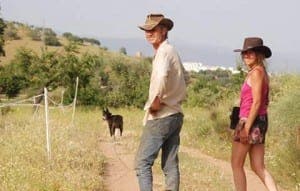 A HORSE-LOVING couple are saddling up for an over 3,000km trek to their wedding.

Niki Fray and Mark of Cadiar in the Alpujarras will ride the length of Spain and France along the GR7 and E2 routes, which will end with them trotting down the aisle in Brighton.

Not content with the challenges of camping every night and long days in the saddle in order to make it back for their big day on September 2, they have decided to go ahead with the trip even though Mark, 48, recently broken his foot after falling from his horse.

“We had always thought it would be lovely to let our horses see the green grass of England and when Mark proposed six months ago we finally decided to it,” said English teacher Niki, who moved from Brighton with Mark 15 years ago.

“We were meant to have already left because we didn’t want it to be a hard slog but can’t now until Mark’s foot is a bit better in about three weeks. 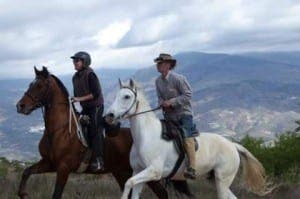 “Hopefully we will be fine though as we are used to long treks in the mountains near our house.”

Along with their two horses Rayo and Tio, pack horse Lorna will carry their provisions up to Gijon and on to Dieppe through eastern France, where they will catch a ferry to England.

“Of course, there will be the challenges of not getting lost,” said Niki, 56.

“But we can’t wait to begin because of the feeling of freedom riding a horse long distances gives you.”

The couple have set up a fundraising page to help them cover some of the costs of their trip here and a blog here.