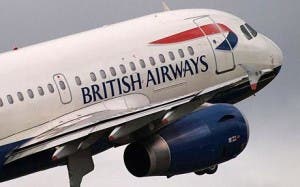 BRITISH Airways have delayed ending free food and drink on their short-haul flights from London’s City Airport after a British father launched a successful legal challenge.

The controversial move was due to take place in August but has now been moved back to October.

It comes after father-of-three John Barber spent €2,300 on eight tickets for his wife and kids and family members to fly from London City Airport to Mallorca this August.

Barber, who bought the tickets weeks before BA’s announced changes, argued that it was unfair that the company would not be providing the service he had paid for.

Barber calculated that if had purchased the same items as he was given for free on the same flight last year – a bottle of water, a small bottle of wine or soft drink, a sandwich and crisps – he would be charged an extra €185 on the new Marks & Spencer’s menu.

He lodged a claim for €374 that included his added costs.

Barber, 40, from Peterborough, said: “I suspect the only reason they changed the cut-off date is because they did not want to go through a court case and open the door to lots of other claims. However, that doesn’t mean they are in the clear.

“We also need BA to make absolutely clear to everyone…exactly when this change is going to come into effect.”

A spokesman for BA would not give a reason for the delay but said: “We now offer a range of M&S sandwiches and salads for under £5, and snacks from £1. Customers say they prefer the new selection.”