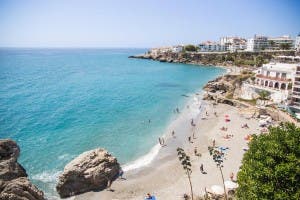 A TOURIST has allegedly been raped in broad daylight on one of the Costa del Sol’s most emblematic beaches.

Police are investigating the assault which took place at Burriana beach, in Nerja, and whether the victim, a 37-year-old woman from Granada, was given a date rape drug.

Fellow beachgoers were left shocked when two men assaulted the bather, who had apparently passed out on a sun lounger around midday.

The men, 25 and 35, were arrested by police as they tried to flee the scene.

Suspicions on whether the woman had been drugged are being probed after witnesses claimed the victim was in an inebriated, semi-conscious state.

Police are questioning whether the men in question gave her burundanga, a drug which completely eliminates the user’s decision-making abilities.

Antonio Jimenez, employee of Rincon del Sol bar on the beach said: “I’ve worked here six years and it’s the first time I’ve ever heard about anything like this happening.

“It’s a very serious and sad case, but hopefully just an isolated one.

“I’m not sure what the council and the police are going to do to ensure the safety of bathers in the future,” he told the Olive Press.

Following the attack, the woman said that she didn’t remember anything that happened or how she ended up at the beach.

It’s an incident which highlights the need for date rape drugs awareness, a topic on which the Olive Press launched a campaign last year.

It comes after the Institute of Legal Medicine revealed that in 2016 there was a 35% increase in sexual assaults in Malaga alone.