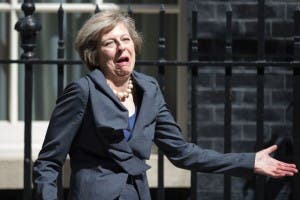 THE UK is now the worst-performing advanced economy in the world.

Britain’s economy has grown by just 0.2% in the first quarter of 2017, the lowest among the G7 group.

Canada, who posted their results yesterday, grew the most in the first three months of this year at 0.9%, confirming the UK’s place at the bottom.

It comes after the UK was outgrowing Germany, Japan and even the US before the Brexit vote last June.

It is now growing at the same rate as Italy’s.

The growth forecast for this year was downgraded at the beginning of May to 1.9% by the Bank of England.

While the UK had performed better than expected following the June vote, it has quickly deteriorated in the new year.

A 2.7% inflation hike thanks to a slump in the pound has made imports more expensive, while the price increases are now outpacing wages.