SPAIN’S leading anti-corruption prosecutor has resigned after admitting he holds a stake in an offshore company in Panama.

Citing ‘personal reasons’, Manuel Moix left his position yesterday shortly after it was revealed that he has a quarter-share in a company that was set up as part of an inheritance from his parents.

Despite his decision to leave, public prosecutor Jose Manuel Maza insisted there was no suggestion ‘of any irregular or illegal behaviour.’

But Moix’s time in the role has been mired by accusations that he tried to interfere in corruption investigations involving the Partido Popular.

Only in the role since February, Moix is alleged to have attempted to undermine several investigations of fraud involving senior PP members in Madrid.

The PSOE said his resignation came too late.

Podemos leader Pablo Igelsias said ‘offshore ministers and prosecutors who corrode democracy and are parasites on institutions’ need to be kicked out of office.

“It means that the People’s party is behaving like a parasite when it comes to institutions; it’s not just looting them to get richer, it’s also risking citizens’ safety by trying to ensure that the police, the guardia civil, judges and prosecutors don’t go after people who are corrupt.” 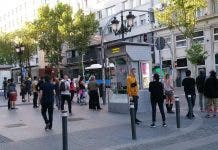