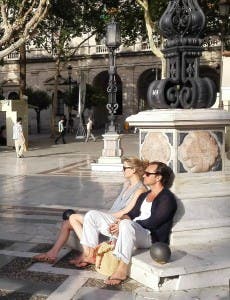 JUDE law has been spotted in Sevilla enjoying the book fair.

The Hollywood heartthrob was snapped reclining under a lamppost enjoying the sun with psychologist girlfriend Phillipa Coan.

The British star was seen taking pictures like a normal tourist, before perusing various stalls at the fair in Plaza Nueva.

He has taken frequent breaks in Andalucia, having been spotted various times on the Costa de la Luz, in particular around Vejer.

Since arriving in Andalucia, the heartthrob confirmed his role as Albus Dumbledore in the sequel to Fantastic Beasts and Where to Find Them.