A SHARK has attacked a bather at one of the Balearic Islands’ most popular beaches.

The 82-year-old Spanish victim suffered a two-inch gash on his hand after a blue shark or large fish struck at Ibiza’s Playa d’en Bossa, which is popular with British tourists.

Terrified swimmers ran to shore following Saturday’s attack with searchers spending an hour scouring the water for the shark.

The beach wasn’t closed and the pensioner, who left the sea bleeding heavily, released from hospital four hours after being admitted.

Blue sharks are one of the most common in the Mediterranean and the same type of shark is thought to have been behind another attack on a tourist on the Costa Blanca last August. 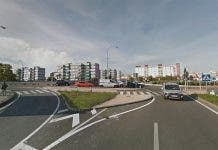 Isha Sesay - 25 Nov, 2020 @ 11:00
In an interview with police, the detainee gave four different versions to explain why his rented BMW was damaged