HE’S navigated ten-foot swells as an international surfer, now restaurateur Edmond is making a splash in C’an Pastilla’s foodie scene. Fins Tapas & Cocktails is one of the coolest eateries in the resort – and wouldn’t be out of place in Palma; its blend of tasty cuisine and hip cocktails is the perfect way to round off a day beside the Mediterranean’s swell. 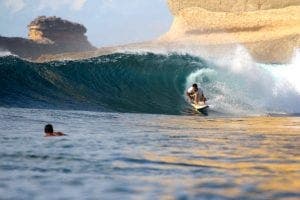 For Barcelona-native Edmond, Fins has allowed him to bring together the gastronomic influences he tapped into as a globe-trotting surfer. “I opened Fins two and a half years. The restaurant is themed around surf. Mallorca is a great place to surf,” he says. “The food is very international, with a very creative menu.

Steak tartare and plenty of dishes that I enjoyed while surfing around the world, but I have adapted them for Mallorca.” It’s a classic family affair with his girlfriend working behind the bar and her mum in the kitchen, while he even has a hardy Scot doing her bit for the expat hordes. Beach boy Edmond spent two and a half years hitting the waves in California, before heading to the north of France – ‘Great surf, but very cold’, then in Bali. 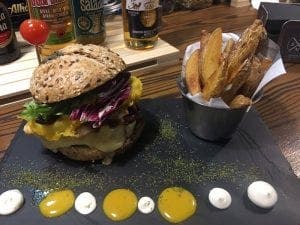 On the walls, a photo of Edmond riding a wave sits along- side a surfer’s sleek board, its fins jutting out proudly. As he speaks, trays of appetising food – jamon Iberico and croquettes – are ferried from the kitchen to the terrace. “We have a full cocktail list, and serve drinks until 2 am at the weekend,” said Edmond. “Negroni, Pina Colada, Caipirinha. We play deep and chillout house, a real beach bar vibe.” And with Edmond a regular at Mallorca’s surfing hotspots, he’s just at home in the waves as he is in the kitchen or bar. 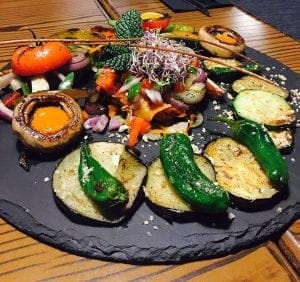 Alex Trelinski - 1 Dec, 2022 @ 17:15
VANDALS daubing graffiti on protected elements of the Serra de Tramuntana could be fined up to €1 million under plans for a new law. The...

Stay away! Mallorca tourism boss in hot water after telling Brits they are not welcome