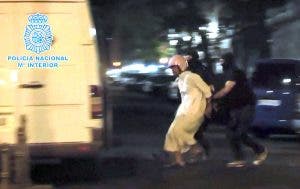 The 32-year-old had a large collection of extreme Islamist material, including a manual for suicide bombers, the government said.

The unnamed 38 and 33-year-olds both lived with the first man in the residential apartment, according to the Interior Ministry.

The first man had been training them to join ISIS.

Footage of the arrest showed armed police in riot gear storming the apartment building before dawn and men dressed in white robes and motorcycle helmets being grappled to the ground and handcuffed outside the apartment block.

The man had an extremely dangerous profile, similar to that of those who carried out recent attacks in Britain and France, the government said, without giving further details.

It added that the man had tried to recruit others to carry out an attack in Spain.
The raid came just two days before the Spanish capital is due to play host to World Pride 2017.
Madrid has boosted security measures to deal with the event, which is expected to attract around two million people to the Spanish capital between June 23 and July 2.
The Interior Ministry seized material including handbooks on how to become a suicide bomber and another one on how to wage jihad online.
Spain’s National Police force is currently analyzing the documents, whose contents range from ‘the most radical kind of ideological prepping’ to ‘acts of martyrdom.’