‘FAKE NEWS’, ‘alternative facts’ and ‘post-truth’ are popular euphemisms destined for the Oxford Dictionary’s list of new words and phrases this year.

Although the terms are contemporary, the role of journalism in ‘manufacturing opinion’ has been a human activity as far back as reliable evidence suggests.

From ancient cave drawings to radio and television and from Cold War propaganda to today’s Twitter feeds, all are communicative attempts to influence an audience and/or further an agenda by presenting facts selectively.

One particularly interesting chapter in journalism’s attempt to manufacture opinion happened right here in Spain. It involved a man with a camera, Spain’s darkest days and a lost suitcase. Let’s connect the dots….

The practice of illustrating news stories with photos, known simply as photojournalism, began nearly two centuries ago in London. The Illustrated London News (1842) first paired news with pictures using primitive engravings. Over the next hundred years or so, great advances in photographic and printing technologies brought photojournalism into the modern age.

The Spanish Civil War – perhaps Spain’s greatest nightmare – was the catalyst for some of the most dramatic imagery ever witnessed in reporting the news. 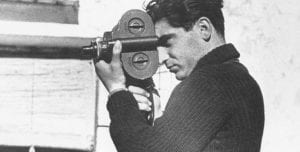 The Spanish war experiences of Ernest Hemingway and George Orwell are legendary. But with the addition of action photos matched with the popularity of the reporting by Hemingway, Orwell and others, the Spanish Civil War became recognised as the ‘Golden Age of Photojournalism’.

Readers now felt like they were in the same foxhole as the actual combatants.  The addition of action photos captioned by these infamous authors enhanced the perceived ‘truthfulness’ of wartime news.

Action photos put forth the adage that the ‘camera does not lie’.

A man named Robert Capa, a close associate of both Hemingway and Orwell, was the bellwether photographer in this new age of photojournalism. He would often accompany war correspondents like Hemingway to photograph battleground action.  Life Magazine, Esquire Magazine and others published many exclusive Hemingway pieces, often paired with Capa’s dramatic photos. The Picture Post, a pioneering photojournalism magazine published from 1938-1957, described Capa as “the greatest war photographer in the world”.

Capa would go on to cover the D-Day invasion, World War II, post-war Russia and Germany and the founding of Israel (1948). In May of 1954, in covering the early stages of the Vietnam War, he fatally stepped on a landmine. He was 41 years old. But the legacy of the man did not die that day. Rather, it was just beginning…

In December of 2007, some 53 years after his death, one of Capa’s lost suitcases was found in an attic in Mexico City. Somehow or other, a lower-level diplomat in exile in Mexico after the war, had came into possession of some of Capa’s belongings, possibly holding them for him while he photographed combat worldwide.

The forgotten suitcase contained over 4,500 previously unseen photos from the Spanish Civil War. This treasure trove of historical records has become known in journalistic circles as the ‘Mexican Suitcase’.

The forgotten suitcase contained over 4,500 previously unseen photos from the Spanish Civil War. This treasure trove of historical records has become known in journalistic circles as the ‘Mexican Suitcase’.

The discovery not only changed the way we look at the Spanish Civil War, but has cast doubt on the perception that the ‘camera does not lie’.

Experts of photojournalism, in researching and interpreting these images, have raised questions about the pure objectivity of Capa’s photographs. Some experts now claim that many of these unseen photos were ‘staged’, discrediting the notion that photographer was indeed ‘in the thick of battle’. 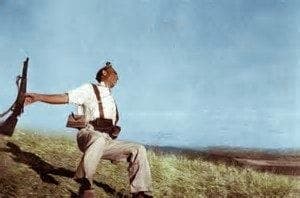 Many of the photos show larger sequences of the same event, suggesting that Capa may have ‘cropped out’ real time combat action in favor of a more dramatic yet staged photo. Also found in the suitcase were some of Capa’s notebooks which reveal the man as a passionate partisan who favoured Republican (anti-Franco) ideology.

Was Capa trying to sell his ideological position to sympathetic foreign readers? Could this be one of the first attempts to use the camera as a propaganda tool? What came first – Capa’s photos or Hemingway’s captions?

Some of these same experts have come to Capa’s defense. This was an age of infancy in war photography. Perhaps Capa was merely experimenting in camera angles, various lighting effects and how best to create dramatic effect to tell a larger story. Perhaps his purpose was to bring the horrors of war – any war – to his and Hemingway’s readers. If re-staging events achieved that goal, then is there not value in Capa’s work?

These questions that have arisen in unpacking the Mexican Suitcase (pun intended) are indeed rhetorical. They can never be fully answered. What is undeniable is that the intensity of Capa’s imagery changed the way news was reported.

Photojournalism, the symbiotic relationship between the written word and photography born during the Spanish Civil War, became an established form of representing a news story. Robert Capa’s dramatic war photos derive their intensity not only in what they depict but also from the ideologically-charged historical context from which they emerge. Is this an example of ‘fake news’ or ‘alternative facts’?

Again, the questions are rhetorical.