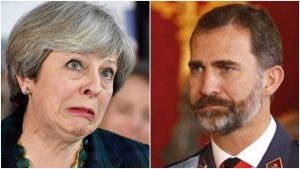 CONSERVATIVE MPs in the UK have threatened to walk out of the King of Spain’s state address next week if the issue of Gibraltar is raised in his speech.

According to The Sun, if King Felipe brings up the thorny issue, as is expected, the MPs would march out of parliament in an unprecedented move that would cause major diplomatic embarrassment for Theresa May.

It comes after Gibraltar was put at the heart of Brexit negotiations in April.

The EU demanded Spain be granted veto power over the Rock’s place in a future trade deal between the UK and the EU post-Brexit.

King Felipe and Queen Letizia of Spain will visit Queen Elizabeth and UK PM Theresa May next week, with an address to Parliament scheduled for Wednesday.

British Ambassador to Madrid, Simon Manley, said on Thursday that it would not be unusual for Felipe to bring up Gibraltar.

It was only last year he accused the UK of ‘colonial anachronism’ over the Rock, first surrendered by treaty to the British in 1713.

The Foreign Office fully expect him to raise the issue when he address MPs and peers from Parliament’s Royal Gallery.

Both Downing Street and Gibraltar’s government are said to be preparing for a royal upset.

Romford MP Andrew Rosindell told The Sun newspaper: “If such an august occasion was used by the Spanish to try re-open the non-negotiable issue of Gibraltar’s sovereignty, I would expect there to be serious anger.”

The vice-chairman of Parliament’s cross-party Gibraltar supporters group added: “The King of Spain should not be surprised if there were to be walkouts from his Royal Gallery speech.”