THE King and Queen of Spain arrived to the UK last night, greeted by dark clouds and heavy showers at the airport.

Both were met by a gun salute and Scots guards procession today, kicking off the first Royal visit by a Spanish monarch to the UK since 1986.

They received an official farewell at Adolfo Suarez Madrid-Barajas airport as they left for London, where they were later greeted on behalf of The Queen by The Viscount Brookeborough, Lord-in-Waiting.

They will be formally greeted by the Queen of the UK and Duke of Edinburgh on Horse Guards Parade this afternoon, in what is said to be 96-year-old Prince Philip’s last state visit before he retires from public duties in the autumn.

The Guard of Honour will give a Royal Salute and the Spanish National Anthem will be played.

King Felipe VI and Queen Letizia will travel to Buckingham Palace in the State Landau, a carriage built for the Coronation of King Edward VII over a century ago in 1902.

The visit is seen as fundamental in smoothing relations with Spain, a key negotiating partner in the Brexit negotiations.

It was postponed twice – firstly due to a political crisis in Spain in March 2016, when no party could win a majority in the national elections, and then again when the rescheduled date clashed with June’s snap general election in the UK.

The action-packed tour will see the King and Queen enjoy a private lunch at Buckingham Palace, afternoon tea at Clarence House and a State Banquet at the Palace with senior members of the Royal family. 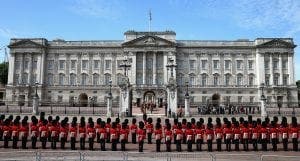 King Felipe will also attend a UK-Spain Business Forum at Mansion House with the Duke of York, the couple will visit Westminster Abbey accompanied by Prince Harry, and they will both meet Theresa May at No. 10 Downing Street.

The royal couple are expected to meet Prince Harry and the Duke and Duchess of Cambridge when they are feted with the grand state banquet in the ballroom on Wednesday evening. It will be the first time full-time royal Harry, who is 32, has taken part in a state visit.

The redhead has now made himself available for all future state visits.

Felipe, 49, is expected to raise Gibraltar when he delivers an address at Westminster from the Royal Gallery to parliamentarians today.

He may also raise it again when meeting prim minister May at Downing Street on Thursday.

It comes after he used his speech to the UN General Assembly in New York last September to call for a negotiated handover of Gibraltar.

He said in that speech: “I invite the UK, on this first occasion at the UN after Brexit, to end the the colonial anachronism of Gibraltar with an agreed solution between both countries to restore the territorial integrity of Spain.”

Gibraltar’s future will be a major point of contention in the Brexit talks with the EU, with Spain being offered a right of veto over the relationship between Gibraltar and the EU.

It comes after the European Union’s top court ruled last month that Gibraltar and the United Kingdom can be treated as a single EU member for certain aspects of EU law, a finding that could complicate the territory’s hopes of winning a special status after Brexit.

Security has been maximised for today’s ceremonial welcome and carriage procession, in what will be the first state visit to take place since the recent terror attacks in Manchester and London.

The Mall was decked out in Spanish flags this week and on Wednesday morning, gun salutes were fired from Green Park and the Tower of London.

The Royal Mews staff were dressed head to toe in their Full State Livery – a uniform that has changed little in over 200 years – ahead of the Ceremonial Welcome.

Horses have been hitched to their respective carriages, ready to be inspected by The Master of The Horse before departing. 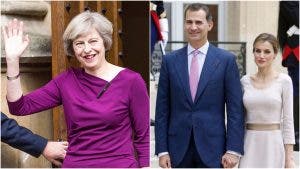 Theresa May will miss Prime Minister’s Questions as the visit is happening one day later than usual.

After first being greeted by the Queen and Duke of Edinburgh, the Spanish King, accompanied by The Duke, will inspect the Guard of Honour, which will be the 1st Battalion Irish Guards.

Felipe and Letizia will then join The Queen and The Duke of Edinburgh for a state carriage procession along The Mall to Buckingham Palace.

Following a private lunch at Buckingham Palace, given by the Queen, she will invite The King and Queen of Spain to view an exhibition in the Picture Gallery of items from the Royal Collection relating to Spain.

Later today they will meet the Prince of Wales and the Duchess of Cornwall for tea at nearby Clarence House.

The Spaniards will finally visit the Palace of Westminster, where they will be welcomed by the Speaker of the House of Commons and the Lord Speaker.

It is here that The King will deliver an Address in the Royal Gallery to Parliamentarians and other guests, followed by a reception with Members and invited guests ahead of tonight’s State Banquet.

On Thursday, Prince Harry will accompany the royal visitors to Westminster Abbey.

As is tradition, Felipe will lay a wreath at the Grave of the Unknown Warrior and Harry will join them on a short tour of the Abbey, including the Tomb of Eleanor ‘Leonor’ of Castile – the 13th century Spanish princess who married Edward I.

William and Harry have a shared history with the King. As youngsters, they holidayed with Felipe, his father King Juan Carlos and their family in Mallorca several times throughout the 1980s. Felipe and Letizia were also guests at the Duke and Duchess’s wedding in 2011.