THE amount of British holidaymakers travelling to Spain has almost doubled over the last 20 years.

According to figures released by the Office for National Statistics today, Spain is the top UK holiday destination, with 12.9 Britons visiting last year, up from 6.9 million in 1996.

France has also seen its figures over the past 20 years drop from six million to 5.6 million last year. 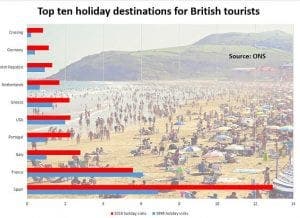 The ONS said the explosion in budget airlines offering cheap flights all over Europe could have also contributed to France’s downturn in popularity.

Belgium and Turkey, which have seen devastating terror attacks, have both dropped out of the top ten.

The series of statistics put out by the ONS also showed that the traditional two-week holiday is in decline as Brits are more likely to opt for shorter breaks.

They also revealed that Theresa May and Jeremy Corbyn – who holidayed in Italy and Croatia respectively – are bang on trend as both countries are enjoying a British tourism boom.
Italy has rocketed in popularity, as more than 2.8 million trips were made to the country in 2016 – over double the 1.01 million made two decades earlier in 1996.

The UAE has seen the largest increase in the number of trips by British tourists in the past two decades.