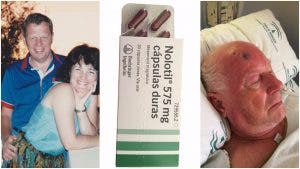 A BRITISH expat has thanked the Olive Press for ‘saving his life’ after he was prescribed the lethal painkiller Nolotil.

Trevor Naylor, a 77-year-old retired police officer from Essex, said he was given the drug by his GP near his home in Mijas golf.

“You might have just saved my life,” he said.

“I was prescribed a five day course of two tablets per day by my GP at the medical centre in La Cala, having gone there after suffering a headache and stiff neck for four weeks.

“By pure chance, before starting the course of treatment last night,  I read your article in the Olive Press.

“Needless to say I will not be taking this drug.”

Meanwhile another, British expat, who chose not to be named, claims his doctor tried to push the deadly Nolotil drug on him despite his pleas for alternative medication.

The pensioner, who was looking for relief for severe abdominal pain, claims the doctor shrugged his shoulders and refused to budge even when confronted with evidence of its devastating effects on British patients.

“I actually showed her recent Olive Press articles but she just told me ‘well that’s what we use in Spain,’” he explained.

“She told me if I wasn’t happy with it that I should take Paracetamol, but she knew that wasn’t strong enough.

“It was basically ‘have Nolotil or nothing at all’.

“I even have a witness, who can confirm what happened.”

It comes as the Olive Press received overwhelming response to its ‘Kill the Drug’ campaign, launched last issue.

So far more than 700 have signed the online petition, including victim Ursula Barry, from Ireland, who said she had been ‘sick for months’ from the drug and was ‘lucky’ to live.

“I was given a double injection of nolotil by a GP when I was suffering from nerve pain on holidays in Portugal in June 2016,” she said.

“I went into septic shock, was diagnosed with pneumonia and spent 15 days in intensive care when it was very touch and go whether I would survive.

“I made it – I was lucky, although I was sick for months,” she added.

Meanwhile, Theresa Bridgette, from Ohio in the US, wrote simply: “This drug killed my father,” alongside her signature.

They join a host of others who have approached the Olive Press to tell of their horrific experience with the drug.

But shockingly, health authorities both in Madrid and Andalucia have yet to comment on the campaign.

Pharmaceutical giant Boehringer Ingelheim, which manufactures the drug, has also ignored our requests for comment.

The more attention the campaign gets, the more pressure we can apply, sign the petition here: https://www.change.org/u/748159939